How a Bill Becomes a Law

Thousands of bills are introduced in Congress each year, but not all become law. Thanks to the wisdom of our Founding Fathers, there is a plan in place to provide checks and balances for our lawmakers as they move through the process of introducing and voting on legislation. This diagram shows a bill traveling through the House of Representatives and the Senate at the same time. This can happen, but often a bill is passed by one legislative body and then sent to the other for action.

Once a bill has been passed in both legislative bodies, it is then sent to the President, who can approve it or reject (veto) it. If the President vetoes a bill, it may still become law, but only if two thirds of the House and the Senate vote to override the veto. As you can see, there are several steps that must be taken for a proposed bill to become law. 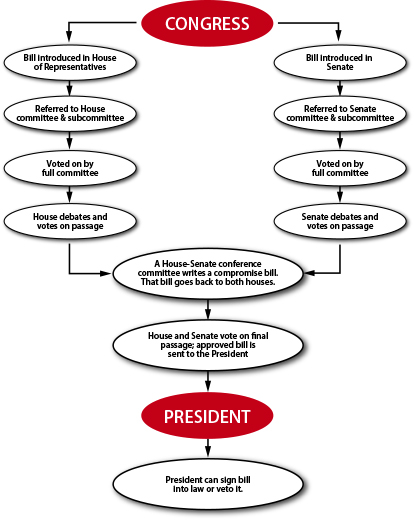 Sign up to stay Informed on new products and resources.